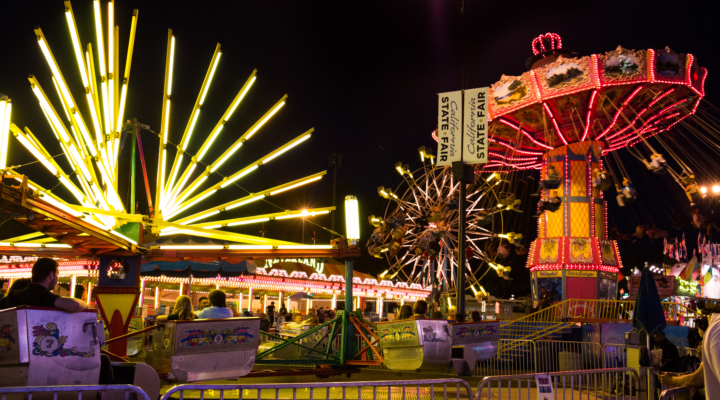 “We are pleased to recognize and honor Dr. McCabe and Kaiser Permanente with our distinguished awards. Both have shown long-term commitments to the youth of our great state and to the California State Fair”, said Rick Pickering, CA State Fair CEO.

The two prestigious awards annually recognize key individuals and organizations that help make the California State Fair one of the premier fairs in the nation.

The Ag Progress Award was established in 1994 and is presented to an individual, company, or organization that has demonstrated substantial contributions to the California State Fair in the area of agriculture program development.

Dr. McCabe has 43 years of educational experience, which includes 29 years at the Department of Education and 14 years as a high school Agriculture teacher.

Dr. McCabe was born and grew up on a farm and has raised sheep his entire life. He has a special affinity for the Suffolk breed. He and his wife have competed very successfully at the county, state, regional and national levels. He is a member of the California Wool Growers Association, California Agricultural Teachers’ Association, and the American Association for Agricultural Educators.

The Golden Bear Award is presented each year to an individual, company, or organization that has demonstrated substantial contributions to the California State Fair.

“We are proud to be a partner of the California State Fair, supporting exhibits like the State Fair Farm,” said Trish Rodriguez, Senior Vice President and Area Manager for Kaiser Permanente in South Sacramento. “We know that if we can teach kids healthy eating and healthy habits from an early age, they are more likely to carry those with them as they grow.”

The health care organization currently sponsors the California State Fair Farm and School Farm Tours. It provides sunscreen for guests throughout the Fair and interactive programs, such as the “plant a seed” program during the CA State Fair.

During the CA State Fair, Kaiser Permanente allows the Fair to use their parking lot across the street on Saturdays and Sundays for guest parking. Kaiser also sponsors a Kaiser Kids Day where they select and bring a group of children to the Fair. During the 2018 Fair, Kaiser sponsored 170 children and parents for Kaiser Kids Day.

Kaiser Permanente began its partnership with the Fair in 2005 when it served as the title partner of the Kids’ Park and Kids’ Stage from 2005-2008. Kaiser also worked with the CA State Fair to create a “Treasure Map” around the Fair so that guests could walk 10,000 healthy steps. Kaiser was the official Sponsor of “Thriving Seniors” and gave away pedometers to the first several hundred guests on Senior Days.

Dr. Lloyd McCabe and Kaiser Permanente will be publically recognized and honored at the California State Fair Gala hosted by The Friends of the CA State Fair on Thursday, June 27, 2019.

This year, The Friends awarded $51,000 in scholarships. The top $5,000 scholarship went to Davis resident Katherine Bradford who plans on studying agriculture. Bradford and the 24 other scholarship recipients will also be recognized at the CA State Fair Gala on Thursday, June 27. For the complete list of scholarship awardees, click here.

Tickets and sponsorship opportunities for the Gala are available now. Click here to purchase tickets. More information can be found at CAStateFair.org.

About the California State Fair

Almonds included in round 2 of support for farmers