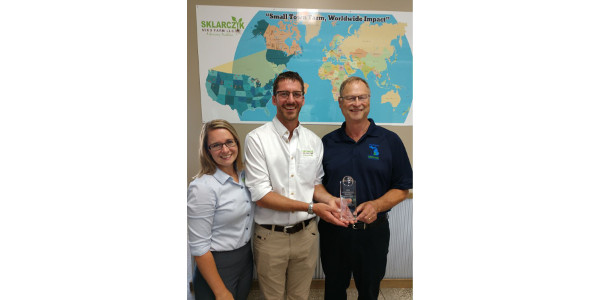 LANSING—The Michigan Department of Agriculture and Rural Development (MDARD) has awarded Sklarczyk Seed Farm of Johannesburg, Michigan, with the 2019 Michigan Agriculture Exporter of the Year Award.

“We’re very proud to recognize Sklarczyk Seed Farm with this award,” said MDARD Director Gary McDowell. “Not only is this a homegrown, generational operation run by a great family and supported by an incredible team, but it’s also a model for how Michigan’s food and agriculture businesses continue to adapt and evolve with an ever-changing, global market.”

The company’s beginnings go as far back as 1942 when Ben Sklarczyk’s grandparents, Michael and Theresa, purchased a farm in Johannesburg, Michigan, and began growing potatoes. However, Michael and Theresa saw a growing demand for potato seeds in the market, and so the farm became a seed farm.

In 1982, the Sklarczyks understood that the future of the potato industry would be in greenhouse grown seed potatoes, and from that point on, the farm began producing high-quality potato tubers (a thickened underground part of a stem bearing buds from which new plants arise). Today, Ben, his wife Alison, and their team, produce nearly six million tubers hydroponically every year, and 100 percent of their production is grown in Michigan.

In 2001, SSF began export operations, and from 2016 to 2018 their exports increased by more than 16 percent. Today, more than 41 percent of their total product was exported to countries such as Canada, Egypt, Chile, Thailand, Germany, and Brazil. As a result of this growth, three new jobs were created at SSF.

“We are honored to be the recipient of the 2019 Ag Exporter of the Year award,” said Ben Sklarczyk, current CEO of Sklarczyk Seed Farm. “As a boy growing up around our operation, I never dreamed SSF would have a worldwide impact on the potato industry. Today I greatly value the customer relationships we have formed and the team we have at SSF, which helps grow some of the best seed potatoes in the world.”

The award review committee consisted of representatives from Michigan State University; Michigan Farm Bureau; Comerica Bank; Foster, Swift, Collins & Smith P.C.; and the Van Andel Global Trade Center. The decision was made based on export growth in the past three years, job creation from exporting, and ability to enter new markets.

To be eligible for this award, more than 50 percent of a company’s product must be grown and produced in Michigan, and exports must have contributed a substantial amount to a company’s overall growth. For more information about past winners and the International Marketing Program, visit: www.michigan.gov/agexport.