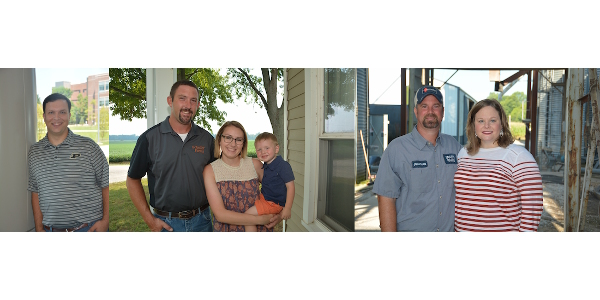 INDIANAPOLIS — Finalists have been selected for Indiana Farm Bureau’s Young Farmer awards, the Excellence in Agriculture Award and the Achievement Award. These state awards are conducted as a part of the American Farm Bureau Federation Young Farmers and Ranchers Award competition.

The Excellence in Agriculture Award recognizes outstanding young Farm Bureau members who do not derive the majority of their income from an owned, production-agriculture operation, but who actively contribute and grow their involvement in Farm Bureau and agriculture. Winners must be voting members of Indiana Farm Bureau between the ages of 18 and 35.

Alan Duttlinger grew up on a grain and swine farm where he developed a love for agriculture. His passion for the industry grew with his involvement in organizations like 4-H and FFA. Duttlinger later earned his bachelor’s degree in animal science and his master’s degree in swine nutrition. His degrees helped him excel in his career, first as a research and development specialist and then as a nutrition manager for a large pork processor. After working for several years in the pork industry, Duttlinger has returned to Purdue University where he is currently pursuing a doctorate in Swine Nutrition. Duttlinger is an active Farm Bureau member, having competed in the American Farm Bureau Federation Discussion Meet, chairing numerous committees and serving as a representative on the State Young Farmer Committee.

The Schellers serve their rural community in many ways. Eric grew up on the family farm, where he spent much of his time helping his father with their row crops and participating in FFA. He still works part time on the family farm and, after earning a degree in Diesel Equipment Technology, works as a diesel technology instructor. Megan serves their rural community as a nurse. While she didn’t grow up on a farm, she’s jumped in and now spends her time outside of work providing meals, assisting with machine maintenance and doing grounds keeping for the farm. The two are also active in Farm Bureau, serving on the county Farm Bureau board and attending many state Young Farmer events.

Jonathan and Derika Spaetti were born into farming. Having grown up on family farms, they developed their passion for agriculture at a young age. Jonathan, a fourth generation farmer, holds an associate degree in Manufacturing Industrial Technology and works alongside his dad and uncle on the farm, and owns his own farming operation. Derika, who holds a master’s degree in Teacher Leadership, is a high school math teacher. The couple is active with many agriculture organizations, including Farm Bureau, where they’ve served as members of many committees, including the State Young Farmer Committee, and on their county Farm Bureau board. Derika also serves on the Indiana Soybean Alliance board of directors.

The Achievement Award recognizes and rewards outstanding young Farm Bureau members whose farm management techniques and commitment to their communities set a positive example for others involved in production agriculture. Winners must be voting members of Indiana Farm Bureau between the ages of 18 and 35 and earn the majority of their income from production agriculture.

The winners of the Achievement Award receive a $6,000 cash prize (courtesy of Indiana Farm Bureau Insurance), 250 hours of free use of one M-Series tractor (courtesy of Kubota Tractor Corporation) and an all-expenses paid trip to compete at the American Farm Bureau annual convention in New Orleans in January. The winners also will be awarded the David L. Leising Memorial Award.

Scott and Jenna Burton both grew up farming with their families and have always planned to keep agriculture in their lives. Scott has an associate degree and Jenna holds a bachelor’s degree in Special Education and is employed full time in that role at a local high school. She also works part time for the farm. Scott farms full time and has been able to work on his family’s farm and Jenna’s family’s farm, and recently diversified the farm operation by adding chicken litter spreading to the business model. The Burtons are also actively involved in many areas of Farm Bureau, from Ag in the Classroom to serving on several state and county Farm Bureau committees.

A love for the agriculture industry and their agriculture operation unites Brent and Ashley Reed. The two come from varying facets of the agriculture industry. Brent grew up raising soybeans and Polypay sheep. Ashley spent her days on a grain and earthworm farm before earning a degree in business administration. Together, they raise corn and soybeans on Brent’s family’s land. When the couple is not farming, they love to express their love of the land through gardening. The two are county Farm Bureau board members and serve as Young Farmer co-chairs. They also attend many meetings, conferences and conventions.

The winners of both contests will be announced on the Indiana Farm Bureau Facebook page on Friday, August 31. All finalists will be recognized at the INFB state convention in December.