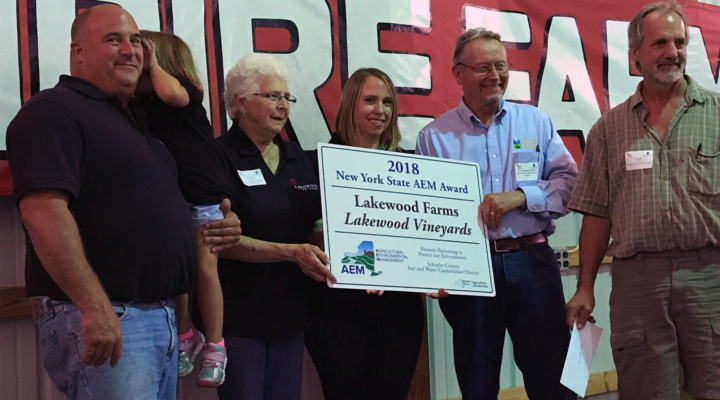 SCHUYLER CO., N.Y. — New York State today congratulated Lakewood Farm and Lakewood Vineyards, located in Watkins Glen, Schuyler County, as the recipient of the 2018 State Agricultural Environmental Management (AEM) Award.  Each year, the award honors a New York State farm for its outstanding efforts to protect the environment through the preservation of soil and water quality and ensure the next generation of farming. This is the first time a New York State vineyard has been recognized with this long-standing award.

NYS Department of Agriculture and Markets Commissioner Richard A. Ball said, “Congratulations to Lakewood Farm & Lakewood Vineyards, the Schuyler County Soil and Water Conservation District, and all of our nominees, who have gone out of their way to care for the environment while increasing the profitability of their operations.  The steps these farms have taken to protect our most precious resources are making an significant impact today and will benefit New York for generations to come.”

The New York State Department of Agriculture and Markets, the Empire State Potato Growers, and the American Agriculturist Magazine presented the award to the Stamp family for implementing conservation best management practices that benefit the environment and protect the community. The award was presented at the annual Empire Farm Days event in Seneca Falls.

David Stamp of Lakewood Farm and Lakewood Vineyards, said, “We’re very honored to receive the award. I’m just carrying on what was instilled in me growing up. We’ve got to take care of the land to reap its rewards. We’ve worked with Soil and Water over the years to help implement a lot of projects. We’ve always had good people there, and I’d say their current crew is among the best. We always seek their advice because it’s good advice.”

Lakewood Farm & Lakewood Vineyards has implemented various practices to address issues that will improve soil health and protect water quality in neighboring Seneca Lake. That includes cover cropping with fast-germinating rye and mulching hay, both of which stabilize soil, replace nutrients and retain moisture in the ground.

Since 1951, the farm has grown from 52 acres to 85 acres while cutting its pesticide use nearly in half with a weather station that’s connected to Integrated Pest Management data and the use of regulated flow sprayers with reduced drift nozzles. The Stamps have reduced erosion and helped protect Seneca Lake – a highly-rated drinking water source – from pollutants in storm water runoff with clean water diversions and permanently vegetated buffers.

The farm was one of the first to compost grape pomace with horse manure to create fertilizer and build organic matter into the soil. Today, the award-winning winery boasts 15 grape varieties and 100,000 gallons of production.

Since 1940, the District has been working to conserve and enhance natural resources in Schuyler County through education, planning and implementation, addressing issues like improving water quality, the prevention of soil erosion and the management of natural resources.

Schuyler County Soil and Water Conservation District Manager Jerry Verrigni said, “Working with the Stamp family is always a pleasure. You know any project you are building on the farm will be utilized and maintained to ensure the integrity of the project. You also know that, while the Soil and Water Conservation District is assisting with one project, the Stamps themselves are working on several other projects. This is because the Stamp family truly believes in protecting natural resources and making their farm better for the next generation.”

NYS Soil and Water Conservation Committee Chair Dale Stein said, “We should be very proud of this farm and all the farms that were nominated, and all that they’ve done to help improve the environment. Our farmers should be very proud. They spend a lot of their own hard-earned money to make great improvements to their farmland for future generations. That’s what AEM is about. These farms have taken the lead with innovative ideas on how to preserve and protect our water, especially on the Finger Lakes. We need more farms to follow their example.”

In addition to Lakewood, eight farms were nominated by their Districts for notable commitment to proactive environmental stewardship on their farms.  They include:

New York State’s agricultural environmental management framework is a model for the nation as a voluntary, incentive-based approach to protect natural resources and meet the economic needs of the agricultural community.

Want to become a Master Gardener?