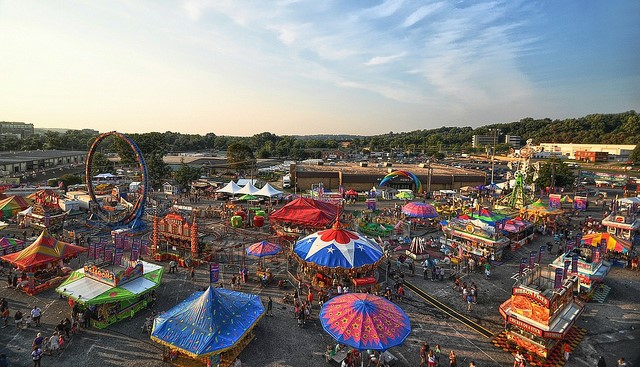 OKLAHOMA CITY — The gates are open for the 2018 Oklahoma State Fair! From the Opening Ceremony to testing your nerve on the Midway to jamming out at the Chickasaw Country Entertainment Stage, everyone can have OLD FASHIONED FUN at our NEW FASHIONED FAIR during Opening Weekend!

Have OLD FASHIONED FUN at the Oklahoma State Fair

Thursday, September 13 is Opening Day and you won’t want to miss it because outside gate admission is $2 for everyone!

Don’t miss new shows like the Puppies of Penzance and Pirate Magic of Rafael & Katia – both performing on the Plaza Stage. New competitions at the 2018 Oklahoma State Fair include the North American Trick Riding Championship and the Stock Horse Versatility Competition. New events that the public can participate in include SINGO & Trivia Night at the Fair on September 13, Board Game Bonanza on September 14 and the Oklahoma State Fair Cornhole Classic on September 23.

All events can be found on our calendar.

The Chickasaw Country Entertainment Stage has free performances for Fairgoers every day during the Fair. This year’s line-up includes up-and-coming stars and country favorites from years passed such as Neal McCoy, Colt Ford and Dylan Scott. Other acts include R&B favorite Dru Hill, Hispanic group Los Traileros Del Norte, and a show called Space Oddity – The Ultimate David Bowie Experience. All shows on the Chickasaw Country Entertainment Stage are free with outside gate admission.

All free concert info can be found on our Chickasaw Country Entertainment Stage page.

Celebrate what’s possible as five Disney heroines spark the courage inside us all in Disney On Ice presents Dare To Dream! Disney’s most magical stories are now LIVE and skating into Oklahoma City for the 2018 Oklahoma State Fair. Dare To Dream with characters such as Moana, Maui, Rapunzel and Flynn Ryder, Anna, Elsa and Olaf, and of course, Mickey & Minnie.

All show information can be found on our Disney On Ice page.

The Oklahoma State Fair will wrap up with a final weekend of dirt-flinging bull riding followed by high-energy country music concerts. Taking place on back-to-back nights, the evening will open with rip-snortin’ bulls that will test riders’ stamina and skill. After the dust settles in the Jim Norick Arena, two of country music’s best acts will take the stage for electrifying performances! On Friday, September 21, Big & Rich will take to the stage to put on an unforgettable performance; and on Saturday September 22, Aaron Watson will bring his brand of red dirt music to the stage. A PRCA Xtreme Bulls Tour & Concerts ticket is required.

All rodeo and concert information can be found on our Xtreme Bulls page.

Oklahoma State Fair, Inc., is an official Adventure Road Travel Partner, which means we’re part of the best destinations you can find on I-35 between Oklahoma City and the Texas border. For more information, visit AdventureRoad.com.

Special event announcements and general updates for the 2018 Oklahoma State Fair will be released as information becomes available. Tickets to the 2018 Oklahoma State Fair, including Disney On Ice, PRCA Xtreme Bulls, outside gate admission tickets and carnival armbands are on sale now. To stay up-to-date on all the Fair fun, visit okstatefair.com, find us on Facebook or follow us on Twitter and Instagram. And don’t forget to share your Fair memories and stories with us using #OKStateFair and #NewFashionedFair.