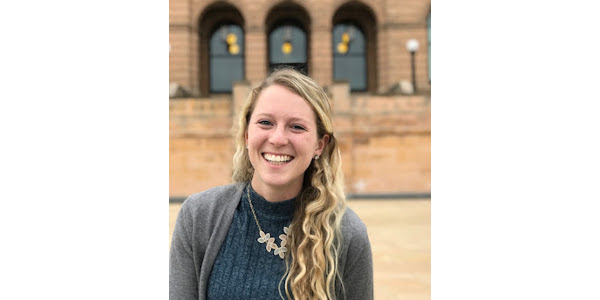 The scholarship is awarded to one sophomore or junior each year who exhibits a demonstrated interest in seed science, global food security and childhood nutrition, and is administered by the Seed Science Center at Iowa State.

Dougherty will be awarded the scholarship at the World Food Prize Lunchoen on Thursday. Dougherty, whose hometown is Epworth, Iowa, shares the same passion that Lambert did, and plans to further her interest in global food security through the scholarship.

“Words can’t express how truly grateful I am to have received the scholarship,” Dougherty said. “I aspire to follow in David Lambert’s career path, as he supported the World Food Prize Foundation and advocated for global food security.”

Dougherty realized the significance of food security for the first time in high school.

“My eyes were opened by the Iowa Youth institute and Global Youth Institute, two events hosted by the World Food Prize,” Dougherty said. “At these conferences, I came to understand the gravity and complexity of local and global food security. It was here that I was inspired by Dr. Norman Borlaug and his quote: ‘Food is the moral right of all who are born into this world.’”

Aside from her studies, Dougherty has found other ways to be involved in alleviating world hunger. She is involved in SHOP, a student food pantry, the Student Dietetic Association and the World Food Prize Foundation. She is also a part of the Honors Program, is an International Friendship Connection Group Leader and recently raised over $7,500 with friends for the Food Forward South Africa and a youth center in South Africa.

Dougherty has also taken her global food security advocacy international. She was a 2017 Borlaug-Ruan International intern in Guatemala, where she gained valuable research skills and gained hands-on global perspective.

After graduation, Dougherty plans to apply for the Iowa State Dietetic Internship with an international placement in Ghana, become a registered dietitian and then get a master’s degree in international nutrition.

Dougherty hopes all of these accomplishments help lead her to her ultimate goal.

“As I firmly believe you cannot live a full life on an empty stomach, my life goal is to increase food security by advocating for sustainable agriculture and nutritious food systems,” Dougherty said.

The Seed Science Center is a center of excellence in seeds at Iowa State University. Its mission is to improve the production, quality assurance, marketing, utilization and regulatory environment of seed through research, testing, teaching, outreach and international programs.