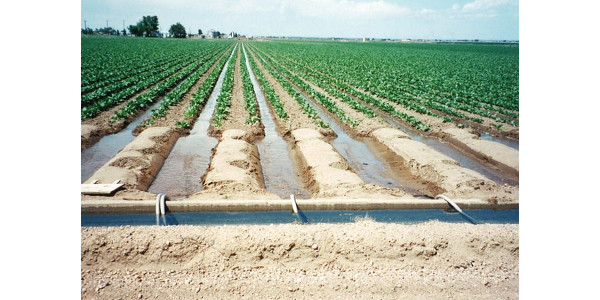 “The 2018 Irrigation and Water Management Survey, formerly titled the Farm and Ranch Irrigation Survey, expands on the data collected in the 2017 Census of Agriculture,” said NASS Administrator Hubert Hamer. “This report offers detailed, comprehensive, up-to-date information specific to the agriculture industry’s use and management of water supplies.”

Data highlights from the 2018 Irrigation and Water Management Survey include:

 The total amount of water used in 2018 was 83.4 million acre-feet, down 5.8 percent from 2013.
 The average acre feet applied was 1.5, which compares with 1.6 in the 2013 irrigation survey. (An acre foot is the amount of water required to cover one acre to a depth of one foot.)
 The largest portion of irrigated farmland acres in the United States was dedicated to cropland – including grain and oilseed crops, vegetables, nursery and greenhouse, and hay crops.
 Farmers irrigated 51.5 million acres of harvested cropland acres in the open in 2018.
 Ground water from on-farm wells accounted for 50 percent of irrigation water applied to acres in the open; the average well depth in 2018 was 235 feet.
 The irrigation results show more irrigated acres with sprinkler systems than gravity irrigation.
 Five states accounted for around one-half of the irrigated acres and water applied – California, Nebraska, Arkansas, Texas, and Idaho.  Equipment, in general, is one of the leading irrigation expenditures with farmers and ranchers spending more than $2 billion on irrigation equipment, facilities, land improvements and computer technology in 2018; energy costs for pumping well and surface water amounted to $2.4 billion.
 Irrigated area of horticulture under protection was 1.53 billion square feet in 2018. This compares with 1.41 billion square feet in 2013.
 Irrigated horticulture grown in the open was 581,936 acres in 2018. This compares with 524,227 acres in 2013.

The 2018 Irrigation and Water Management Survey followed up with approximately 35,000 producers who indicated in the 2017 Census of Agriculture that they irrigate. Producers provided information on water sources and amount of water used; acres irrigated by type of system; irrigation and yield by crop; and system investments and energy costs.

“The 2018 Irrigation and Water Management Survey results provide valuable information that farmers, ranchers, policymakers, and others can use to make agriculture water use more efficient,” said Hamer. “In making decisions about their operations and their communities, producers and policymakers can learn about the use of improved technology, efficient ways to irrigate, and ways to reduce irrigation-related expenses.”