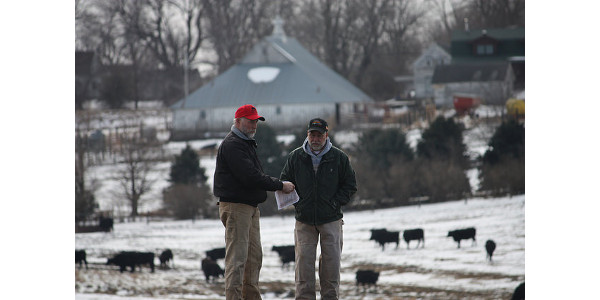 AMES, Iowa — Six years ago, the Iowa Cattlemen’s Association developed a program to benefit Iowa cattle producers and friends of the industry. The Carcass Challenge Contest showcases Iowa’s feeder cattle genetics and feedyard performance; offers a fun, competitive statewide contest to demonstrate Iowa’s beef production opportunities and advantages; and raises non-dues revenue, which the ICA then invests in educational events for all sectors of the beef industry.

Educational Opportunities
The 2016-17 Carcass Challenge Contest included a few changes for the program. For starters, the 2016 Young Cattlemen’s Leadership Program (YCLP) class recruited a record setting number of 81 head of steers to be fed at Kennedy Cattle Company of Atlantic. The steers were delivered in early November and marketed in May. Proceeds from the steers help fund YCLP.

Throughout the program, data was gathered to be used for educational purposes. Bi-weekly email communications with sponsors and donors provided updates on the steers and educational information on the data collected.

David Trowbridge and Faye French with Gregory Feedlots, along with Matt Groves with the Tri-County Steer Carcass Futurity Coop, played a major role in developing advanced educational materials. New charts and graphs were created to display the data that was collected and showcase different performance traits, offering an opportunity to “see” the steers’ performance on paper. Program participants were able to see how genetics and pre-contest environment affected the cattle.

In early February, ICA and Kennedy Cattle Company hosted an open house at the feedlot for everyone involved with the program. By that point in time, the steers had been on feed for three months, weighed twice, ultrasounded twice by Isaiah Shnurman, interpreted by Mark Henry with The Cup Lab and reimplanted. The group was presented with educational charts and graphs and given the opportunity to visit with Trowbridge and Groves and discuss the information as a group. Zak and Mitch Kennedy also shared their philosophy on feeding and handling cattle.

Winners Announced
On June 1st, ICA hosted the Sixth Annual Carcass Challenge Banquet at the Iowa State University Alumni Center in Ames.  The audience was presented with Mallorie Wilken, Ph. D. with Elanco Animal Health on the benefits of using modern technology to advance their cattle’s performance in the feedlot. The keynote speaker of the evening was Bob Fields with Global Protein Solutions. Bob presented very positive and thought provoking information to the group of Iowa cattle producers and friends of the industry. Much was taken away from Bob’s presentation on cattle marketing, domestic and international trade and bringing back full-circle to the end consumer from a retailer’s point of view.

Awards were presented to the Top 10% of the number of steers in the contest based off the contest performance and carcass data that was taken at harvest on May 2nd at the Tyson Plant in Dakota City, SD. The main award is for Retail Value per Day on Feed (RVDoF). The RVDoF is a measurement of profitability and a value-added calculation that consider important consumer quality issues such as tenderness and flavor. Additional awards given in the contest were for the Highest Average Daily Gain, Largest Ribeye Area, Highest Marbling Score and the Chef Award, which recognizes a 12-14 inch ribeye with the highest marbling score. The winners all received an engraved rawhide banner and cash or merchandise award. The top winning steer donors were award a check for $5,000, which this year’s winners have graciously donated back to the ICA.

The 2017 winner of the Carcass Challenge Contest in the RVDoF went to John Wessels with Pine View Angus of Colesburg and Mike Cline with Har-Mar Farms of Elgin. In second place, the award went to Rex Hoppes and Mike Henderson with Advanced Beef Genetics of Anita. The third place winner was Brian McCulloh with Woodhill Farms of Viroqua, WI. In fourth place was JD Morris of Algona and the Kossuth County Cattlemen and fifth place was Carl Bormann of Bancroft, also sponsored by the Kossuth County Cattlemen. Jim Bradford and the Guthrie County Cattlemen took home the sixth place award. The Jones, Delaware & Dubuque County Cattlemen steer raised by Jason Kurt walked away with the seventh place winnings. And in eighth place, the award went to Brad Balsley of Floyd and Bob Noble of Riceville.

The winners of the individual categories were Pine View Angus and Har-Mar Farms for the Chef’s Award and the Highest Marbling Score of MDAB07, the highest marbling score ever held in the history of the contest. The winner of the Largest Ribeye went to Advanced Beef Genetics with a 17.1 inch ribeye area. Advanced Beef Genetics also took home the award for the Highest Average Daily Gain of 5.20 pounds per day.

Young Cattlemen Begin Recruiting Efforts
The Carcass Challenge provides the Young Cattlemen’s Leadership Program (YCLP) with not only funding, but a team project to encourage leadership skills. YCLP class members recruit steers and donors for the program, and proceeds from the sale of the steers funds the next class of YCLP participants.

The ICA would to thank the sponsors, donors and everyone involved with the program. We are already making plans for the next Carcass Challenge Contest. The deadline for registering a spring 2017 steer for the contest is October 6th. Details and entry requirements can be found on the ICA website www.iacattlemen.org under the ICA Programs tab. The 2017 YCLP class will soon be working on recruiting steer donors for the contest, but anyone interested in participating in the program can call the ICA office at 515.296.2266 to get involved.