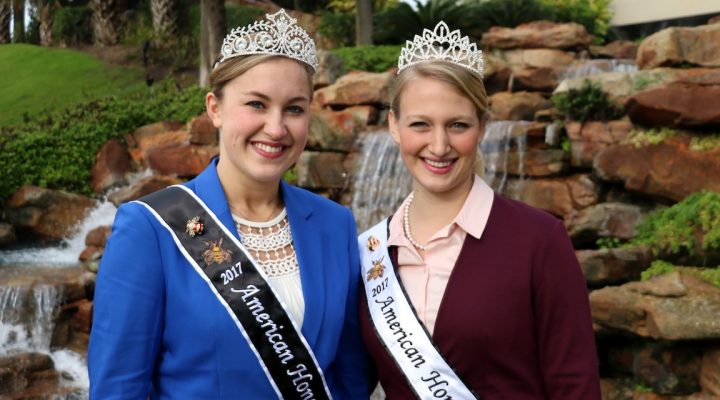 Maia Jaycox and Hope Pettibon were selected as the 2017 American Honey Queen and Princess. (Courtesy Photo)

GALVESTON, Texas — The American Beekeeping Federation is proud to announce that Maia Jaycox and Hope Pettibon were selected as the 2017 American Honey Queen and Princess at its annual January convention in Galveston, TX.

Queen Maia is the 19-year-old daughter of Scott and Juli Jaycox of Webster City, IA, and the granddaughter of Lynn and Debbie Jaycox of Webster City, IA, and of Richard and JoAnn Kuebler of Tucson, AZ. She is a sophomore at Iowa State University in the open option program with an interest in biology. She is a member of the Kappa Alpha Theta sorority at Iowa State. Maia began beekeeping with her family about four years ago and currently tends to seven hives of bees. She previously served as the Iowa Honey Queen

Princess Hope is the 20-year-old daughter of Patrick and Christie Pettibon of McKinney, TX, and granddaughter of Larry and JoAn Davis of Greenville, TX. She is currently attending a bible college in south Texas and has future aspirations to be a wilderness emergency medical technician. Hope has been keeping bees with her family since 2004 and has earned awards for her honey. She previously served as the Texas Honey Queen.

Maia and Hope will spend the next year promoting the beekeeping industry throughout the United States in a wide variety of venues, including fairs, festivals, schools, and media interviews. To schedule an appearance with American Honey Queen Maia Jaycox or American Honey Princess Hope Pettibon, please contact American Honey Queen Program Chairperson Anna Kettlewell at 414.545.5514.