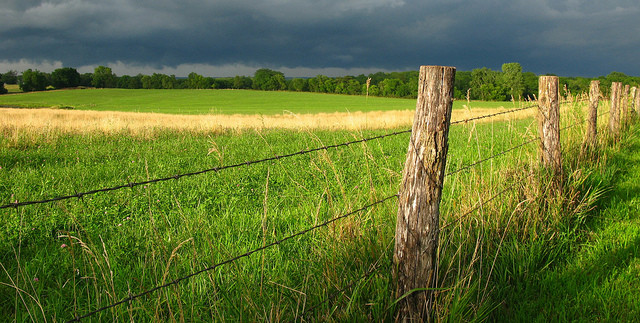 Administered by the Leopold Center for Sustainable Agriculture at Iowa State University, the award recognizes researchers, teachers and farmers who have contributed significantly to the environmental and economic stability of the Iowa farming community. (OakleyOriginals via Flickr)

AMES, Iowa — A farming couple who advocate for sustainable agriculture and a USDA agronomist are the recipients of the 2016 Spencer Award for Sustainable Agriculture. David and Corrine Williams of Villisca and Tom Kaspar, Ames, will be accepting this prestigious award on March 22 at the Iowa Water Conference in Ames.

The Spencer Award is one of the largest and longest running awards of its kind in Iowa. Administered by the Leopold Center for Sustainable Agriculture at Iowa State University, the award recognizes researchers, teachers and farmers who have contributed significantly to the environmental and economic stability of the Iowa farming community.

David and Corrine Williams own a six-generation heritage farm in Page County, Iowa. David began farming with his father and brother. Sixty years ago, the couple purchased some added farmland of their own. They grew corn and soybeans, raised hogs, and ran a cow-calf operation. David and Corrine have turned over operations to their son, Bruce, and grandson, Aaron, who is the sixth generation of Williams to farm the land. The Williamses practice no-till and have done so for over 20 years. The farm also has terraces and cover crops, which they added four years ago.

They are strong advocates for sustainable farming. In 1995, David was part of the Iowa Environmental Council organizing committee, an accomplishment of which he is most proud. He served on the IEC board of directors from 1992-2000 and is now an ex officio member. He was a member of the Leopold Center Advisory Board from 1993-2002 and served as board chair in 2000. The Williamses are recipients of the National Cattlemen’s Association Environmental Stewardship Award as well as the Practical Farmers of Iowa Sustainable Agriculture Achievement Award.

As one who tries to stay ahead of the learning curve, David’s advocacy has taken him to Washington, D.C. where he has testified on behalf of the Sierra Club and the Soil Conservation Service. In Washington in 1999, he discussed the Gulf Hypoxic Zone, or Dead Zone, and its relationship with Iowa farming practices, before many Iowans had made the connection between them. David also helped establish the Wallace Foundation for Rural Research and Development at the ISU Armstrong Research Farm near Lewis.

Tom Kaspar is the Iowa go-to person for cover crop information. He is a soil scientist with the USDA-Agricultural Research Service (ARS) National Laboratory for Agriculture and the Environment, located at Iowa State University, Ames. He began researching cover crops in 1990 with a grant from the Leopold Center and he planted his first research plots that fall. He had been working with no-till and soil compaction, so adding cover crops fit favorably into the equation.

In addition to conducting the research, Kaspar takes his findings to the public. He has authored fact sheets and book chapters, provided training to field staff and was instrumental in the creation of the Midwest Cover Crops Council (MCCC).

Nominator Eileen Kladivko, agronomy professor at Purdue University as well as a founding member of MCCC, says that Kaspar’s work “on cover crops has contributed to our understanding of cover crop establishment, growth, and winter hardiness, with particular attention to cover crops that are potentially useful in Iowa. Tom’s studies have clearly shown the significant effect that cover crops can have on reducing nitrate losses from tile-drained fields, which saves nitrogen for the soil and subsequent crops while protecting water quality.”

Originally from Omaha, Kaspar earned a B.S. in biology, an M.S. and Ph.D. in Agronomy-Crop Production and Physiology, all from Iowa State University. He began working for the USDA-ARS as a scientist in 1981.

The Spencer Award honors Norman and Margaretha Spencer, who farmed near Sioux County for 40 years. Although not a graduate of ISU, Norman Spencer maintained an active relationship with ISU’s College of Agriculture and several professors, encouraging them to conduct research on sustainable practices and family farming. The Spencer family established the award in 2001 through an endowment. It includes a $1,000 cash prize for each winner. Learn more about the award, and read a tribute to the Spencers written by their children, at http://www.leopold.iastate.edu/spencer-award.

The Leopold Center for Sustainable Agriculture was established in 1987 through the Iowa Groundwater Protection Act. It is a research and education center at Iowa State University created to identify and reduce negative farming impacts and to develop new ways to farm profitably while conserving natural resources. The Center’s competitive grants program awards funds to researchers and investigators across Iowa, extending more than 500 competitive grants since 1988. For more information about the Leopold Center, visit the website: www.leopold.iastate.edu.

A good time to consider joining a CSA