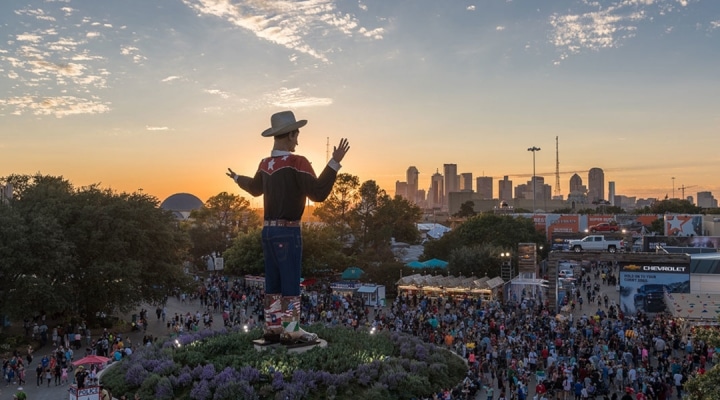 DALLAS, Texas — Closing the gates on the 2021 State Fair of Texas embodies an even greater meaning than years past. After more than 700 days without the State Fair of Texas, the opportunity to come together safely again this year was the celebratory reunion we all longed for, and finally rejoiced in for 24 fun-filled Fair days. In the State Fair’s 135th year, themed, “Howdy, Folks!,” fairgoers from all walks of life returned to the annual event to celebrate their favorite Fair traditions and create new memories with their loved ones. The 2021 State Fair of Texas welcomed more than 2.2 million people through the gates.

As a 501(c)(3) nonprofit organization, the Fair aims to support the community, both locally and statewide. The net proceeds from the Fair are used to preserve and improve Fair Park; underwrite museums, community initiatives, and scholarship programs to support students throughout the Lone Star State pursuing higher education; and help improve State Fair operations. The annual State Fair of Texas serves as the organization’s largest fundraiser of the year – a successful 24-day run for the Fair means more support for Fair Park and the surrounding community.

“We are incredibly grateful that we played a part in reuniting friends and families for the time-honored tradition of the State Fair,” said Mitchell Glieber, State Fair of Texas president. “We’d also like to extend a hearty thank you to everyone who came out to enjoy the 2021 exhibition – your support helped us bring back thousands of job opportunities for the North Texas community, it provided our vendors with the income they rely on to keep their small businesses flourishing for years to come, in addition will allow the State Fair to continue fulfilling its nonprofit, mission-related initiatives.”

The State Fair of Texas is a collection of small businesses, from more than 80 food and beverage concessionaires, to nearly 50 ride and game owners, to more than 100 exhibitors – these businesses are the heart of the State Fair. They each bring diverse and unique qualities to the event that our fairgoers have come to love and expect year after year. In addition to being pillars of our organization, each year these businesses rely on the income they make at the annual State Fair of Texas. With the cancellation of the 2020 Fair, it was inevitable that our vendor family was faced with financial adversities, but despite those hardships, our vendors returned stronger than ever to help us put on a safe and successful State Fair of Texas this year.

“This Fair has meant so much to us this year,” said Brent and Juan Reaves, owners of Smokey John’s BBQ. “Having no Fair last year cut the jobs of so many of our seasonal team members. It hurt them to lose those resources and because of that it hurt us as well. The return of the Fair not only means more opportunities for us but also for our team. Our business can’t survive without them – because of that we are so grateful to have had the 2021 Fair.”

“New Kastl Events has been privileged to be contracted as a games vendor at the State Fair of Texas for 14 years,” said Misti Kastl, New Kastl Events Owner. “Honestly just the opportunity to open after the year we had in 2020 means the world – and to have such an incredible 2021 Fair means even more than ever, not only for our company but to our family and the families of those who we employ.”

“We are very pleased to be back to normal,” said Mary Talley, owner of Sky Spectacle, State Fair Spectacular, Talley Amusements, and the iconic Texas Star Ferris wheel. “The comeback is always stronger than the setback, and our return to the State Fair of Texas is no exception.”

“The Texas Department of Agriculture is proud it could be a part of helping businesses of Texas get back to selling their products after a tough 18 months of event cancellations and supply chain issues,” said Sid Miller, Commissioner of the Texas Department of Agriculture. “The GO TEXAN Pavilion highlights Texas companies and ag industry partners to fairgoers and the past 24 days have flown by with thousands of people coming through the Pavilion and purchasing Texas made products. If you missed us this year shop us online at shop.gotexan.org, but don’t worry we’ll be back again next year!”

Serving as our largest fundraiser of the year, the 2021 State Fair of Texas proved to make a difference in more ways than we can count. Below are just a few of the noteworthy successes from this year’s exhibition:

A Texas-sized thank you to each person who made their way back to the fairgrounds to celebrate all things Texan, making the 2021 State Fair of Texas a comeback for the ages. The 2022 State Fair of Texas will run from Friday, September 30 through Sunday, October 23 in Fair Park. Big Tex and everyone at the Fair will be eagerly waiting to welcome y’all back again next year!