Home / National / $1M to aid efforts to combat Desert Locusts
A new user experience is coming! We'll be asking you to login to your Morning Ag Clips account March 1st to access these new features.
We can't wait to share them with you! Read more here. 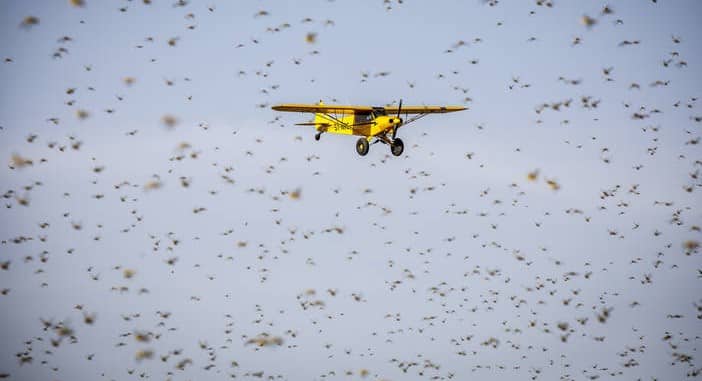 ROME — The Africa Solidarity Trust Fund (ASTF) has donated $1 million to the Food and Agriculture Organization of the United Nations to combat the worsening Desert Locust upsurge in the Horn of Africa.

The decision came at a meeting of the ASTF Steering Committee at FAO headquarters in Rome on Wednesday.

“We have a window of opportunity before the next planting season. We must act now. Flexible funding, like that of the ASTF, helps us move fast,” said Maria Helena Semedo, FAO’s Deputy Director-General for Climate and Natural Resources, who is currently attending a ministerial briefing on Desert Locusts on the margins of the African Union Summit in Addis Ababa.

“The contribution from the Africa Solidarity Trust Fund presents a timely opportunity calling upon all African countries and resource partners to support the outbreak through the ASTF platform,” said the the ASTF Steering Committee Chairperson, Maria De Fatima Jardim, who is also the Permanent Representative of Angola to FAO.

The Desert Locust is the most dangerous migratory pest in the world and according to FAO’s latest update, the recent upsurge presents an unprecedented threat to food security and livelihoods in Ethiopia, Kenya and Somalia.

The FAO Locust Watch warns that South Sudan and Uganda are now at risk and there is also concern about new swarms forming in Eritrea, Saudi Arabia, Sudan and Yemen as locust infestations continue to grow on both sides of the Red Sea.

FAO has estimated that $76 million is needed to scale up efforts to control the rapid spread of this pest and FAO Director-General QU Dongyu has called for urgent action to combat the upsurge. So far, more than $18 million has been donated to the efforts to fight the upsurge.

The potential for destruction is enormous.  A locust swarm of one square kilometre can eat the same amount of food in one day as 35,000 people.

FAO is already working closely with local and national governments and partners, supporting surveillance and control operations and initiating efforts to safeguard livelihoods and assist in the longer-term recovery and resilience of those affected.

However, intensive ground and aerial control operations need to be urgently scaled up to detect and reduce the locust numbers before they spread any further.

By Africans, for Africans

The Africa Solidarity Trust Fund (ASTF) is an innovative Africa-led fund which supports African development initiatives and is uniquely positioned to reinforce the capacities of affected African countries to combat the locust.

Launched in 2013, the ASTF provides catalytic and ﬂexible funding to support Africa-to-Africa initiatives on food and agriculture systems, at the regional and country level.

The ASTF’s latest donation follows similar action by the Steering Committee in the wake of the outbreak of the Ebola disease in West Africa several years ago.

Is it hemp or marijuana? Scanner gives instant answer