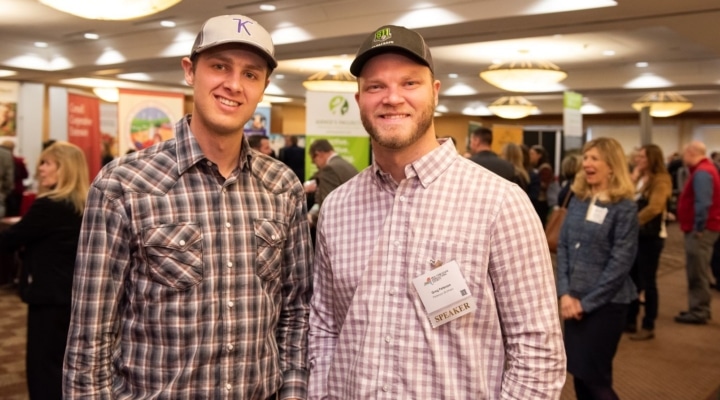 The Peterson Brothers of Assaria, KS were featured speakers at the 188th Annual Meeting & Forum of the NYS Agricultural Society January 9h in Syracuse, NY. Greg and Kendal Peterson presented a portion of their 13 music parodies and spoke to their successful online advocacy efforts. The pair also presented at a joint workshop of LEAD NY Class 18 and the Ambassador Scholars. For more information on the Annual Forum, including the State-of-the State of Agriculture Address presented by Commissioner Richard Ball of the NYS Department of Agriculture and Markets, go to www.nysagsociety.org.

SYRACUSE, N.Y. — Each January, agricultural industry leaders gather in Syracuse at the NYS Agricultural Society Annual Meeting & Forum to discuss pressing issues and recognize peers for outstanding achievement. This historic event, now in its 188th year, drew over 400 attendees in 2020 representing a wide-range of producers, suppliers, regulators, educators and promoters. On the heels of the release of the most recent Ag Census, Julie Suarez, Associate Dean for Government and Community Relations at the College of Agriculture and Life Sciences (CALS) at Cornell University, drilled down into NYS statistics discussing trends including the 60 percent rise in the number of young farmers and how NYS production continues to diversify and grow. Industry trade groups representing livestock, grains, vegetables, and dairy weighed in on major themes experienced in state and across the nation. The annual Forum is sponsored by the NYS Department of Agriculture and Markets, NYS Agricultural Society Foundation and CALS. 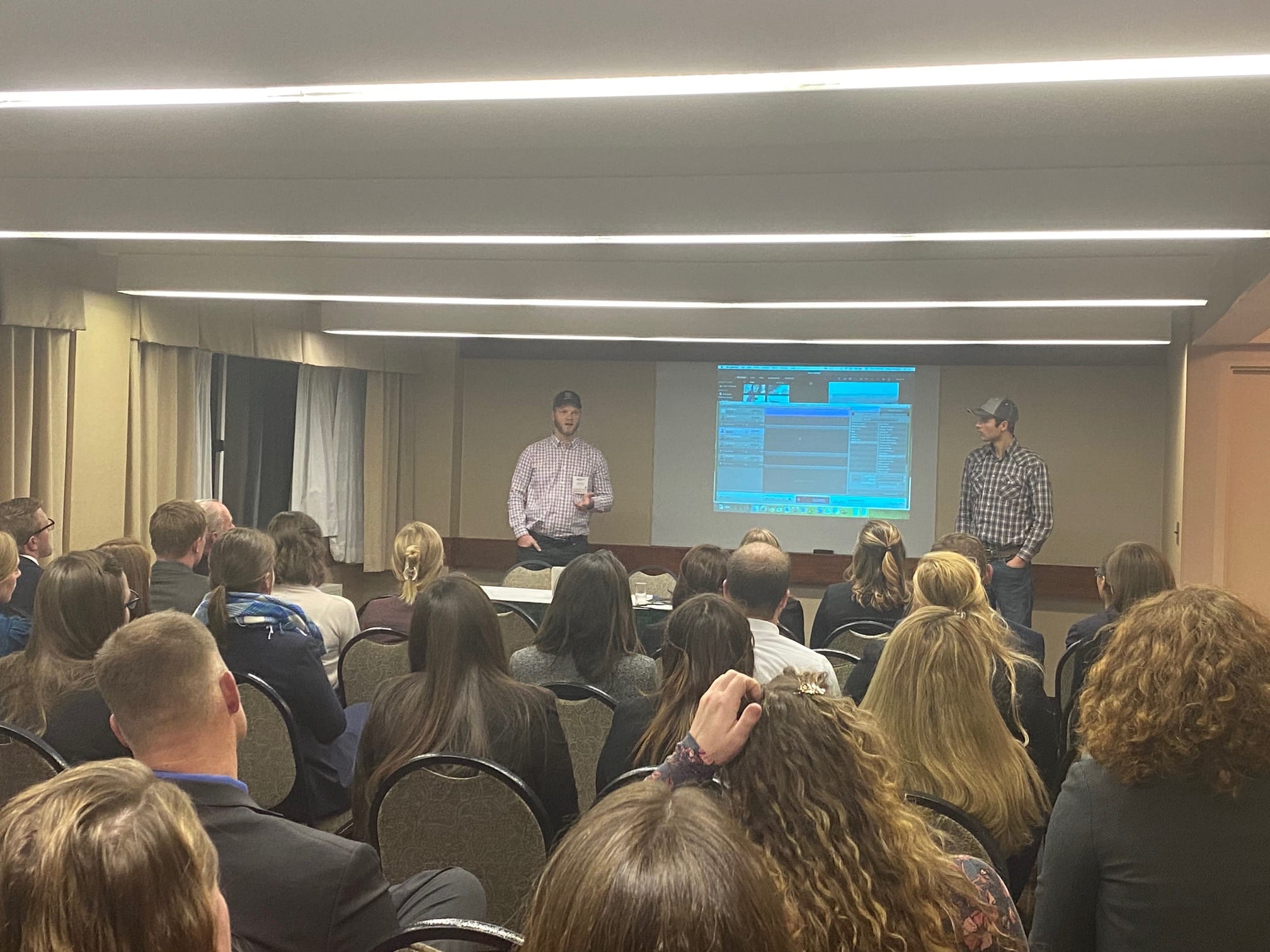 The Society welcomed three special guests to the 2020 Forum. Commissioner Richard Ball of the NYS Department of Agriculture and Markets presented his annual state-of-the-state message. Greg and Kendal Peterson of Assaria, KS—two-thirds of the Peterson Brothers of social media fame—discussed and performed a selection of their 13 musical parodies promoting agriculture. They later conducted a “nuts and bolts” workshop to a joint gathering of LEAD NY Class 18 and 15 Ambassador Scholars. Ambassadors are young adults ages 18 to 25 who are sponsored to attend the Annual Forum by the NYS Agricultural Society Foundation.

According to Ambassador Coordinator Katie Carpenter, Kendal (22) and Greg (29) Peterson were definitely relatable for the combined workshop group which spanned in age from 19 years old and older. “They could see themselves in the Petersons and see what they could potentially do on behalf of agriculture within their own spheres of influence. The Petersons manage a variety of social media platforms, but find Facebook to be their most successful. Their goal is to be 100% authentic. Through this kind of honest rapport, they’re able to discuss the harder issues that consumers are most concerned about.”

“We are all voices for agriculture and the Peterson brothers are a great example of how to use that voice,” said Kathleen Noble Wolfley, LEAD NY and Sr. Economist and Research Specialist with Blimling and Associates, Madison, WI. “I am thankful for the opportunity to see first-hand what goes into their projects and how they tackle tough questions from consumers.”

Throughout the day, the NYS Agricultural Society honored agriculture’s promoters, journalists, cutting-edge producers, and legacy farms in the Empire State.

2020 Century Awards—Recognizing Western NY farms in 2020 that are in continuous operation for 100 years or more by the same family on the same land. Sponsored by Farm Credit NE Ag Enhancement.

Bricdale Farm—Established in Perry, NY in 1889, the Brick family began as a small dairy. To accom-
modate subsequent generations the operation has evolved to include a beef operation, and specialty crops including lettuce, microgreens and sunflower sprouts. In 2016 they installed a top-dry grain bin.

Windmill Farms, LLC—Established by Belgium immigrants in 1916, the Coene family farm has a significant apple legacy. Growing from their original 55 acre tract in the Town of Webster, today the operation encompasses 500 acres and produces over 30 varieties of apples.

Business of the Year—Awarded to both a producer and an agribusiness, recognizing quality, leadership and innovation. Sponsored by the NE Agribusiness & Feed Alliance and Gold Star Feed and Grain, LLC.

Producer Category: Lakewood Vineyards of Watkins Glenn, NY was founded in the early 1950s on the western banks of Seneca Lake. Four generations of the Stamp family have grown this business from growing grapes for Welch’s and other large wineries, to producing their own estate grown fruit for vintages under their own label. The Stamps have a legacy of stewardship and entrepreneurship within the local community and wine industry. Their tasting room draws over 60,000 visitors annually.

Agribusiness Category: King Brothers Dairy of Schuylerville, NY has a long, storied history in Eastern NY. Today’s generation—Jan and Jeff King—have returned to their roots, bottling and delivering milk from their own 1,000-cow herd to commercial and private customers in their community and Hudson Valley. In 2019, they launched a retail store at their farm location, selling over 34 flavors of ice cream.

Next Generation Farmer Award—Recognizing a long-time producer and those new to the industry who are farming in new and vibrant ways. Sponsored by Freed Maxick and The Voss Group.

Dead End Farm: Ben and Kate Whittemore have grown their certified organic dairy from a single heifer to a 170-cow herd in Candor, NY. They manage over 300 acres of pasture for rotational grazing, and till an additional 500 acres for hay, corn, soybeans and small grains. Dead End Farm has adopted modern technologies to conserve and carefully manage natural resources including a manure storage pit and a leachate treatment system for their feed bunk.

Hanehan Farmily Dairy: Generations two and three of the Hanehan family are working side by side at two farm locations in Saratoga Springs and Mt. Upton. The operation has strategically expanded to accommodate five family members who have returned to the business after completing college or working elsewhere. The Mt. Upton expansion is 50 percent complete. The farm has grown to just over 2,000 cows who are milked in a 72-cow rotary. The home farm is comprised of 700 milking head with 1,400 owned and rented acreage.

Distinguished Service Citation—Recognizing an individual who has dedicated a lifetime of service, resulting in outstanding contributions to NY agriculture. Sponsored by NY Farm Bureau.

Dr. Kathryn Boor: Currently Dean of CALS at Cornell University, Boor grew up on her family’s dairy farm in Horseheads, NY. She received her undergraduate degree in food science at Cornell University which served as a launchpad for an extensive industry career. Boor was the first woman faculty member at Cornell’s Food Science Department. In addition to establishing the Food Safety Research Laboratory at Cornell and her research to improve the quality and safety of locally produced fluid milk and dairy products, she has served as Dean since 2010. CALS is the second largest college at Cornell.

Farm Safety Awards— Recognizing farm operators who have unique and successful farm safety programs that protect their employees and other valuable resources. Sponsored by Cargill, Inc.

Du Mond Companies: Safety is not just a philosophy at Du Mond, it’s a lifestyle given the complexity and diversity of activity, equipment, materials and long work hours dedicated to planting, harvesting and processing grain. Du Mond Companies is operated by Todd Du Mond and a team of 30 dedicated managers and employees. Their operation includes a 6,000-acre farm, trucking and feed business which produces GMO and non-GMO feed products based in Union Springs, NY. In 2019, they launched a soybean extrusion facility.

NYS FFA Chapter of the Year—Founded nationally in 1925, FFA makes a positive difference in the lives of high school students by developing their potential for leadership, personal growth and career success through agricultural education. In 2020, the NYS FFA Award sponsored by the NYS Grange is recognizing new or emerging FFA programs.

Delaware Academy Central School District at Delhi: Delaware Academy FFA is a prime example of a new program making a powerful impact on kids and community. All high school students are required to take an FFA leadership course. Club specific activities include a maple sugaring enterprise, mandatory community service, and events interfacing with school and local government leaders at the Delaware County Fair.

Ag Promotion Awards—Recognizes individuals and groups for their efforts to improve the understanding of agriculture in NYS. Sponsored by Alpha Zeta Fraternity at Cornell University, Kreher Family Farms and the NY FFA Foundation.

Washington County Fair: Since 1840, the Washington County Fair has been bringing together generations of agriculturists and their neighbors to its Greenwich, NY fairgrounds, spreading out over 130-acres. Over 100,000 visitors attend the fair annually, and they have 18,000 on-line followers.