Home / Lighter Side / 13-year old cartoonist supports 4-H, local fair with “Ducky Comics”
A new user experience is coming! We'll be asking you to login to your Morning Ag Clips account March 1st to access these new features.
We can't wait to share them with you! Read more here. 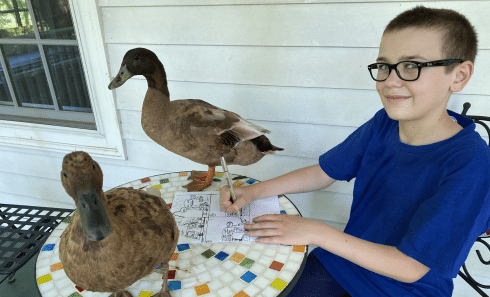 CHAPPAQUA, N.Y. — Cartoonist Henry McEvoy’s debut issue of “Ducky Comics” is set in Carmel, New York’s Putnam County Fair, an event that was canceled this summer due to the Coronavirus. 13-year-old Henry aims to increase awareness for the fair organized by Cornell Cooperative Extension while raising funds for New York State’s 4-H Foundation. The first comic strip, created in Chappaqua, NY, features a father and son duck visiting the fair and entering a flying contest. Said Henry, “In this alternate universe a lot can happen, like an out-of-control raccoon with a jetpack, a swat team of ducks, and more!”

Henry created the comic after realizing that this year’s fair would be canceled. Henry stated, “Last year I brought my pet ducks and chickens, and so I wanted to support the fair this year even though we couldn’t be there.” Supporters can download the comic and make a donation at www.gofundme.com/f/4h-campaign-by-henry-of-ducky-comics, where proceeds will support 4-H and fund scholarships for educational programs around New York state.

Henry’s comic features typical fair sightings, such as musical performances, animal exhibits, and prize-winning vegetables. Said Henry, “I wanted to make it seem like the real fair while inserting my own characters.” His series will follow 4-H events in a world populated by ducks, chickens, and raccoons. While drawing “Unexpected Events at the Putnam County Fair,” Henry referenced family photos, fairground images, and the Putnam County Sheriff’s website, in order to draw a patrol car. Sheriff Robert L. Langley Jr. stated, “The Putnam County Sheriff’s Department supports our Youth, and commend 13-year-old Henry McEvoy who is using the art of drawing as a safe way to celebrate community events during this Pandemic. We especially like Henry’s drawing of the Deputy Patrol car, and wish Henry luck with his 4-H fundraiser.”

Henry’s “Ducky Comics” first started releasing stories to the public this summer, and has made a commitment to donate all proceeds to 4-H. “At my GoFundMe site, you can read my comic and help 4-H,” said Henry. “People can donate to the charity that has taught me all about chickens and ducks, and how to take care of them.” Henry, who is entering 8th grade at Whitby School in Greenwich, CT, is a member of 4H: Hooves, Beaks, and Bills in Croton, NY. To read Henry’s comic and support his fundraiser, visit gofundme.com/f/4h-campaign-by-henry-of-ducky-comics or email duckycomics2020@gmail.com.

About the Comic Tree
The Comic Tree is proud to partner with Ducky Comics and GoFundMe in this effort to support New York State 4-H Foundation, Inc. The mission of the Foundation is to support youth development in New York by raising and dispersing funds to support scholarships, educational trips, and other innovative programs that support 4-H’s mission mandates of STEM, Healthy Living, and Civic Engagement.

Who are you kidding?

The Pirate Kitty of Ferny Hills: How a thieving ginger cat brought joy to a neighbourhood
January 17, 2022