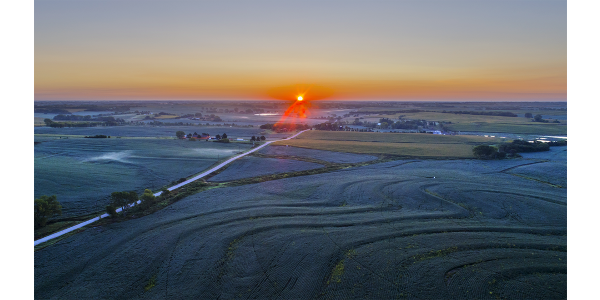 Research by Nebraska's Suat Irmak and Meetpal Kukal is using 115 years of data to track changes in climate in regions across the United States. (Craig Chandler - University Communication)

LINCOLN — The past century of climate change has extended the average U.S. growing season by nearly two weeks but driven annual buildups of yield-stifling heat in the West and Northeast, says new research from the University of Nebraska–Lincoln.

Relying on data collected from 1900 to 2014, the study assembled a region-by-region composite of how climate change has affected agricultural timelines and the yields of six major crops throughout the contiguous United States.

The last frost of the spring season now occurs roughly seven days earlier than it did 100 years ago, the study concluded, and the first frost of the fall strikes about five days later — though the trends did vary by region. Those frosts traditionally mark the beginning and end of a growing season, meaning that U.S. farmers have an average of 12 more days to plant, cultivate and harvest crops.

“If you have a longer growing season, you can cultivate longer-maturing crops that yield more than shorter-season crops,” said co-author Suat Irmak, Eberhard Distinguished Professor of Biological Systems Engineering. “But doing that is going to require more water, more nitrogen, perhaps more insecticide, pesticide, herbicide and fungicide — all these inputs that go into growing crops. More analyses are needed to determine the viability and economics of growing longer-season crops in different regions.”

To examine links between temperature changes and crop yields during the past century, Irmak and doctoral student Meetpal Kukal used a measure of annual heat accumulation that factors in the ideal growing temperatures of the six crops. Each crop has a base temperature below which it will not grow. By adding up the differences between an average daily temperature and that base temperature whenever the former exceeded the latter, the researchers calculated how many degrees of a growing season’s cumulative temperature spurred crop growth.

According to that metric, the United States averages 90 more degrees Fahrenheit of accumulated heat now versus a century ago. But at the national scale, that increase was actually linked to lower yields among five of the crops — corn, soybean, sorghum, spring wheat and winter wheat — with only cotton responding positively to the trend.

“It’s possible that we exceeded temperature thresholds and stressed the crops too much in some regions, and heat stress can be detrimental for crop productivity,” Irmak said. “That’s perhaps why there’s a yield reduction. But there’s another component: water stress. As you have more (heat accumulation), that means more thermal energy for evaporation and water loss through transpiration. In non-irrigated areas, that evaporation might not be replenished.”

Yet most of the agricultural belts where the study’s six crops are grown — especially the Upper Midwest, Ohio Valley and Southeast — saw slight to moderate decreases in heat accumulation during their growing seasons. Corn, soybean, sorghum and winter wheat yields generally rose in those regions, the study reported, while yields of heat-craving cotton fell.

“The implications of these changes are really different for each crop, and they have to be studied (accordingly),” Kukal said.

By contrast, cumulative heat increased in the western and northeastern portions of the United States. That trend especially affected the Southwest, which saw its annual heat accumulation rise by about 500 degrees Fahrenheit — by far the largest positive or negative shift of any region. The annual heat accumulation of one site in California increased by nearly 2,300 degrees Fahrenheit over the century.

Irmak and Kukal concluded that the longer growing season has influenced crop yields less than the changes in accumulated heat, which more directly and regularly affects the growth of a crop. And because many growers plant well after the last spring frost and harvest well before the first fall frost, the widening window may not have increased yields as much as it could have, the researchers said.

Taking that information into account, Irmak said, could help growers improve the odds of maximizing their planting conditions and potentially save money by reducing the risk of failed plantings.

“For optimal crop growth, development and yield, you have to plant at a certain soil depth, moisture and temperature level,” Irmak said. “If you have that right combination when you plant a crop, you are starting off great, which is very critical for the rest of the season. What happens in that short time period is critical for the rest of the season in terms of productivity, quality and economics.

“But in the Midwest, because we have such fast-fluctuating weather conditions — hail storms or a lot of rain or no rain — you may have to go back and replant. If your growing season is longer, your planting window will be longer, too. You will have more opportunities to look for the right combination of soil temperature and moisture. That’s a big benefit, because we lose a lot of yield, money and time in the Midwest through replanting.”

The emergence of longer seasons might also get farmers reconsidering which planting strategies make the most sense from both a yield and cost standpoint, Irmak said.

“If my growing season is longer, can I plant two short-season crops? If so, which crops will be viable in different regions? Will that be more economical than just one corn crop or soybean crop? We would be able to do that now, because we have longer seasons,” he said. “But is that more economical in terms of inputs and outputs?

“I think one of the advantages of our team is that one of our feet is always in the ground. All of us have spent a lot of time traveling to many locations and collecting data, so when you get to the office and start analyzing that data, part of your brain is still in the field. That helps you couple the scientific data and analyses with real-world conditions, which can make the interpretation of the results more meaningful in practice.”

Irmak and Kukal detailed their findings in the journal Scientific Reports.