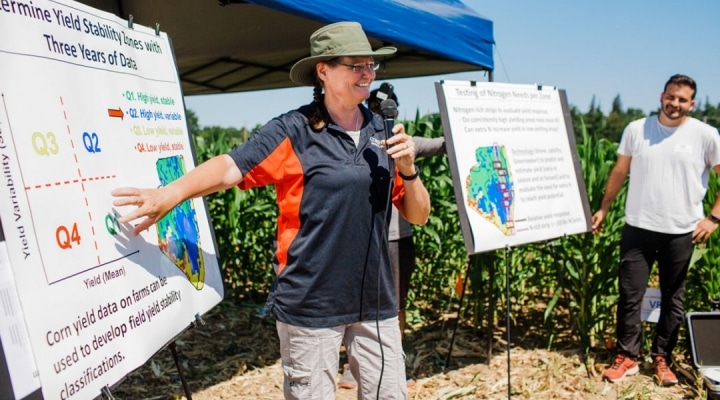 Quirine Ketterings, professor of animal science in CALS, connects with farmers about crop yields during a 2018 extension event at the Aurora Research Farm. (Allison Usavage/Cornell University)

The project is funded by The Foundation for Food & Agriculture Research (FFAR), a federal agency that enables public-private partnerships by matching private funding with federal dollars. FFAR granted $10 million to this project while private donors such as Nestlé and the dairy industry will provide matching funds and in-kind support for a total of $23.2 million.

“The whole purpose of this project is to measure the greenhouse gas footprint of dairy farming more accurately, and to evaluate strategies to reduce that footprint, or even enable dairy to become a net carbon sink,” Ketterings said. “We certainly can sequester carbon in the soil. But we have to figure out how to do it in a way that’s economic, practical and implementable for farmers.”

The most widely cited study on the greenhouse gas impact of dairy farming, published in 2013, found that it takes 1.23 kg of carbon dioxide to produce 1 kg of milk. However, the dairy industry has improved its footprint since then: Between 2007 and 2017, dairy producers reduced greenhouse gas emissions by 19%, land use by 21% and water use by 30%, according to research in the Journal of Animal Science.

There are also significant limitations in previous studies of carbon impact, and this grant aims to address those. Ketterings’ lab will measure greenhouse gas emissions from farmland – and analyze the impact of several carbon-suppressing and soil health-enhancing management practices – by taking regular, frequent measurements at a working dairy farm in western New York. Eight farms across the United States will be studied using the same equipment and methodologies.

“One of the things that’s central in this grant is standardizing our measurements,” Ketterings said. “A lot of times, people produce information about carbon footprints, but it’s not directly comparable to data that other people have collected. Important for this project is consistency across the board so we can have a much more accurate picture of dairy’s greenhouse gas impact.”

David Fisher, president of the New York Farm Bureau, said the grant will provide greater insight to help the state’s dairy industry meet its carbon neutral goals, and remain a leader in sustainability.

“Dairy farmers depend on scientific research to guide our efforts to increase productivity and reduce our environmental footprint, and Professor Ketterings’ work has been a trusted source for that information,” Fisher said.

Karl Czymmek ‘86, vice president for agronomy and field sciences at Dairy Management, Inc., the trade association overseeing the project nationally, said this is one of the first coordinated multiyear, multisite field studies of dairy crop and manure systems in the United States.

“It will be an immense help to the dairy industry by making a critical contribution to the body of knowledge relating to greenhouse gas emissions, water quality impact and carbon sequestration,” said Czymmek, formerly a senior extension associate at Cornell, where he spent 20 years working directly with New York dairy farmers.

The data gathered through this grant will support the U.S. dairy industry’s Net Zero Initiative to make carbon-reducing improvements. These efforts include studying feed additives and genetics to reduce cow methane emissions; no- or low-till farming; cover crops and precision agriculture to reduce feed production emissions; conversion of farm-produced biogas into renewable energy; and nutrient-management planning to more carefully capture the fertilizing benefits of manure while minimizing its carbon impact.

Data from this project could also be used to develop strategies for farmers to be compensated for their environmental stewardship practices, such as through carbon or water quality markets.

“It’s important for our dairy farms to contribute to a reduced environmental footprint, and our farmers want to help,” Ketterings said. “They want to be part of the solution, and this project gives us an opportunity to do that.”