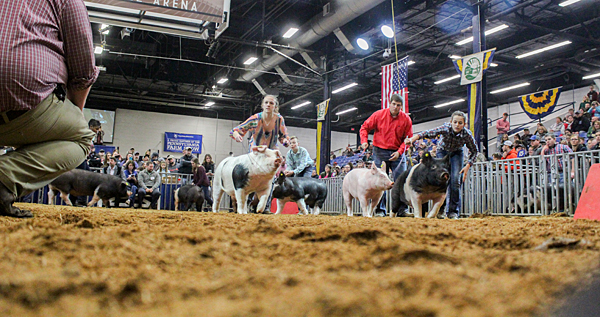 The final drive of the 2018 Junior Market Hog Show. (Pennsylvania Department of Agriculture)

HARRISBURG, Pa. — Despite single-digit temperatures early in the week, throngs of visitors and exhibitors came out to experience the nation’s largest indoor agricultural event during the 102nd Pennsylvania Farm Show, where they learned about the diversity that makes the industry so strong here.

The 2018 show, themed “Strength in Our Diversity,” highlighted the breadth and diversity of Pennsylvania’s agriculture and food industry, the people who make it thrive and investments the commonwealth has made to support the industry’s long-term prosperity. Nearly 14,000 competitive exhibits — including 3,327 competitive exhibitors and 232 commercial exhibitors — were on display within the 24 acres spread throughout the complex’s 11 halls and three arenas.

The eight-day show kicked off with the traditional unveiling of a butter sculpture depicting the diversity of Pennsylvania agriculture — specifically careers and roles that support the dairy industry.

Gov. Tom Wolf officially opened the show on Jan. 6, recognizing the nearly 580,000 Pennsylvanians who work in the agriculture and food industry. During the ceremony, Gov. Wolf reinforced his administration’s commitment to building an agriculture industry where everyone, regardless of their background or zip code, has a chance to succeed.

Gov. Wolf also addressed more than 500 state and local officials on Wednesday, noting that agriculture is an incredibly vital industry that policymakers and industry must work collaboratively to strengthen and grow. During the public officials luncheon, the Wolf administration unveiled a report detailing the economic impact of agriculture and providing recommendations to for future growth.

On Jan. 8, Agriculture Secretary Russell Redding helped to unveil a new plan to support healthy pollinator populations in the face of challenges that have decimated some species. The Pennsylvania Pollinator Protection Plan is the product of a collaborative effort by state officials, researchers, farmers, beekeepers and the public and according to Redding, further collaboration will be needed to reverse declining populations.

Redding also hosted the Army v. Navy Cook-Off, the centerpiece of the show’s Military, Veterans and their Families Day, a full day of events honoring veterans for their service to our country. The challenge was held on the PA Preferred™ Culinary Connection stage, which earlier in the week hosted Food Network chef Alex Guarnaschelli.

Scholarships of $3,500 were awarded to 28 young exhibitors from across the state. Youth market livestock exhibitors received a record $376,121 for their 423 animals in the junior livestock sale on Jan. 9.

In addition to hosting a variety of Ag 101 talks and demonstrations from across the agriculture industry, the Expo Hall’s Lancaster Farming Stage showcased four Century and Bicentennial Farm families. The ceremony also recognized 197 farms encompassing 16,236 acres that were safeguarded through the state’s nation-leading farmland preservation program in 2017.

Vendors at the food court kept busy serving up Farm Show favorites for hungry visitors. As of Saturday morning: