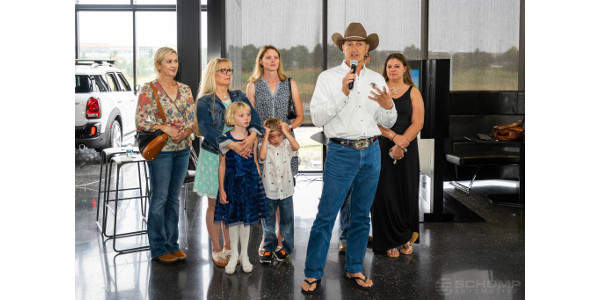 Douglas County Commissioner Roger Partridge accepts the organization's first-ever Code of the West Award with his family standing by in a show of support for his work. (Courtesy of Northwest Douglas County Economic Development Corporation)

DOUGLAS COUNTY, Colo. (PRNewswire) — The Northwest Douglas County Economic Development Corporation (NWDCEDC) was pleased to join the Douglas County Fair in celebrating the completion of its 100th Anniversary Fair event. The NWDCEDC hosted its ‘Cowboy After Hours’ event on Friday, August 3rd in celebration of the occasion, where attendees raised $85,000+ in contributions for the Fair’s Junior Livestock Sale to support the 4-H and FFA youth.

The ‘Cowboy After Hours’ event has been held for eight years, led by EDC investors and founding partners Sterling Ranch, Schomp Automotive, and the Clough Cattle Company. The event was fully sponsored, allowing all funds raised from sponsorships to go toward a large pool for auction bidding at the fair. Through this pool of funds, the ‘Cowboy After Hours’ attendees helped to elevate the bid levels for animals offered at the youth auction and ensured that each child and their animal had the chance to be included in the fun. Businesses also contributed at the Junior Livestock Sale by purchasing market animals for their business as well. Previous years have brought in an average of $70,000 between the sponsorships and individual business purchases at the Livestock Sale.

“We so enjoyed co-sponsoring this event again, especially in this, the Fair’s 100th anniversary year. Our master-planned community is located in Douglas County and we are passionate about helping support this wonderful place we call ‘home,’ ” said Diane Smethills, one of the founding partners of the Sterling Ranch development.

“The founding partners of the Cowboy After Hours event could not think of a more deserving honoree for our inaugural ‘Code of the West’ award. Commissioner Roger Partridge has been a volunteer and leader for the Douglas County Fair for countless years, as well as serving on Planning Commission and the Board of County Commissioners. He has consistently been a leader in bringing the rural and urban communities of Douglas County to work side by side,” said Amy Sherman, President of the Northwest Douglas County EDC.

The Douglas County Fair ran from Thursday, August 2nd through Sunday, August 5th at the Fairgrounds in Castle Rock. The Fair included a rodeo, with royalty, a carnival, a creative arts competition, and the junior livestock sale, where ‘Cowboy After Hours’ participants had the chance to contribute their raised funds.

Giving back to the community has been a longtime Schomp family tradition and this legacy continues through partnering with this event, along with a significant number of community causes and nonprofits throughout Colorado. Schomp Automotive hosted the fundraiser event at their MINI location in Highlands Ranch before the group traveled by bus to the County Fair’s live auction on Friday evening.

About the Northwest Douglas County Economic Development Corporation The NWEDC’s mission is to promote the region as a premier place to locate or expand a business by creating a strong local economy, marketing the community, advocating for business with governmental audiences, and partnering to create infrastructure improvements necessary to drive new business to the region. The organization was founded in 2012. To learn more, please visit www.nwdouglascounty.org