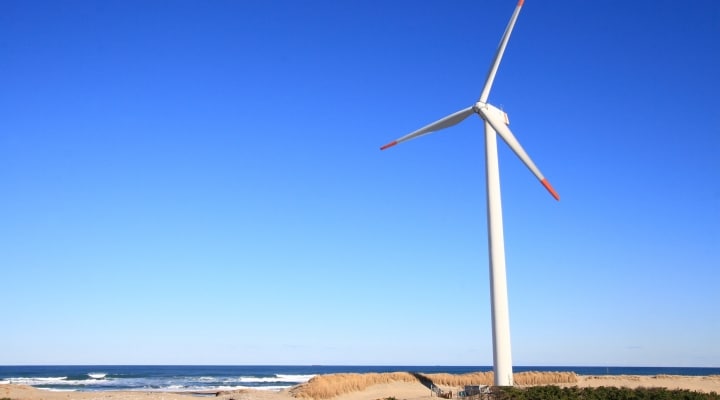 For 10 years, the University of Delaware and Siemens Gamesa Renewable Energy have operated a unique partnership. Using a single 2-megawatt G-90 wind turbine on UD’s Hugh R. Sharp Campus in Lewes, clean energy has been generated, fellowships provided to students, and research undertaken to lower costs and barriers to wind energy. (photo by skyseeker, Creative Commons/flickr.com)

LEWES, Del. — For 10 years, the University of Delaware and Siemens Gamesa Renewable Energy have operated a unique partnership. Using a single 2-megawatt G-90 wind turbine on UD’s Hugh R. Sharp Campus in Lewes, clean energy has been generated, fellowships provided to students, and research undertaken to lower costs and barriers to wind energy.

Using the turbine, UD faculty and staff and Siemens Gamesa have educated students, government officials, other communities and curious people from throughout the region. They have learned about many facets of wind energy including on topics from communities’ acceptance of wind power projects to the corrosive effects of the marine environment on turbines. Real-time data on how much power is being generated by the turbine is available online.

Jeremy Firestone is the director of UD’s Center for Research in Wind and managing director of First State Marine Wind, the joint venture through which UD and Siemens Gamesa operate the turbine. While the turbine has provided opportunities for students to gain hands-on experience and helped green electricity production, Firestone said the most groundbreaking aspects about the UD turbine are the partnership with Siemens Gamesa that built it and the research partnership that sustains it.

Revenue from the power generated by the turbine funds research approved by a committee with representatives from the university and the company, advancing research of value to academia, industry and society.  First State Marine Wind also recently pledged sponsorship money toward the 2021 NAWEA/WindTech conference, which will be hosted by UD.

Under its agreement with First State Marine Wind, UD purchases not only the energy created by the wind turbine, but also renewable energy credits (RECs), which electric suppliers like the Delaware Municipal Electric Corporation (DEMEC) are required to hold under state law to document their green energy investment. In another unique partnership — this one between UD and DEMEC, which involves nine towns across the state, including Newark and Lewes — funds that are raised in the transfer of the RECs from UD to DEMEC are used to pay for fellowships for graduate students studying wind power or energy storage.  Students receiving fellowships from that funding present their research to the DEMEC board each year, providing another of the low-profile and unexpected benefits that have developed from the project.

“Over the years, the board members have become more interested in our work,” Firestone said. “Providing the board with scientific-based information on renewable energy in an easily digestible way allows us to be of service to the communities.”

Gonzalo Palacio Gaviria, head of technical project management for Siemens Gamesa in North America and Firestone’s counterpart in the project, agreed that the model established by the partnership provides many benefits to the University, students and the company, some of which are not obvious.

“It helps us to fine-tune the system. It is always about having the chance, having a turbine with accessibility to do all those tests and trials. It is complicated if you go to a wind farm,” which typically needs to keep running to maximize power generation, Palacio Gaviria said. The UD turbine “allows us to do research…to reduce costs or increase accessibility of wind.”

History of the UD Turbine
Firestone and Willett Kempton initially took the idea for a University wind turbine to Nancy Targett, then dean of theCollege of Earth, Ocean and Environment (CEOE), where both Firestone and Kempton are professors in the School of Marine Science and Policy.

Targett championed the idea with University administration, Gamesa agreed to partner on the project (which occurred before the company merged with Siemens’ wind power business), and U.S. Sen. Tom Carper helped find federal funds to assist with financing it.

“UD’s Lewes Campus wind turbine is yet another example of how investments in clean energy can pay dividends far into the future,” Sen. Carper said. “Ten years ago, with strong support from the Obama-Biden Administration, the University of Delaware moved forward with building one of the first wind turbines of its kind in the United States, one that could provide us with critical offshore wind research while powering the UD campus and reducing its carbon footprint. Today, in part because of the research opportunities from this special wind turbine, the University of Delaware continues to be a world leader in offshore wind research and is training the next generation of clean energy experts. I was proud to support the project 10 years ago and continue to support it today.”

It took less than a year to build and begin operating the turbine after the agreement between UD and Gamesa was signed in October of 2009. Under a unique virtual net metering agreement with the Lewes Board of Public Works (LBPW), the wind turbine is used to power the five buildings on the Sharp campus that use the largest amount of energy, with additional electricity (a little over a quarter of the total generated) sold for use by the residents in Lewes.  The agreement is structured so that Lewes residents pay the same price for green electricity that they do for conventional power from sources such as coal, natural gas and nuclear power. All told, it powers about 100 Lewes homes each year.

As the years progressed, the turbine continued to create successes. Gamesa tested a variety of equipment with the turbine, including a streamlined generator that proved its worth for use in the North American market.

Over 10 years of regular maintenance and upgrades to operating software and systems, the turbine has generated more than 50,000 megawatt-hours of clean electricity, including nearly 5,400 MWh in 2019-2020, the highest production yet.

Future of the UD Turbine
The expected life of the turbine is between 20 and 30 years, meaning there is at least another decade of production ahead, and Firestone and Palacio Gaviria both note that it could be possible to upgrade components to keep the turbine running even longer.

For Estella Atekwana, current dean of CEOE, the turbine connects the college’s past and its future in a way that represents the goal of all the science underway by its faculty and students.

“This year is the 50th anniversary of our college, in addition to the 10th anniversary of the turbine, and in both cases we are celebrating remarkable successes earned by being at the cutting edge of science and technology while looking for ways to continue that innovation in the future,” she said. “Our goal for all of the work we do at CEOE is to advance science that serves society. Improving the knowledge of what is required for renewable energy to be developed and to address climate change is not only a perfect example of that goal, but it is also one of the most important areas for us to focus on in the next decade.”

Over that time the turbine will keep facilitating research, funding students, and providing a unique opportunity for people to learn more about wind energy as it becomes a bigger and bigger part of power generation in the United States.

From Siemens Gamesa, Palacio Gaviria also saw continued value for his company in the turbine.

“The experience we have had with UD has been very positive,” Palacio Gaviria said. “There are a lot more things that can be done in that test turbine.”