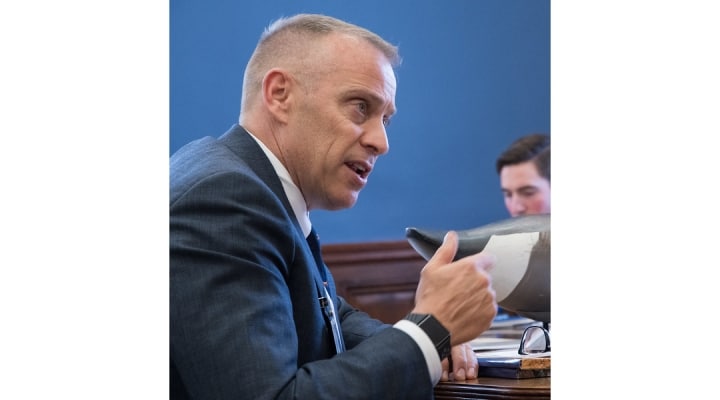 “Now in its fourth year of grant-making, the Pecos Watershed Conservation Initiative continues to strengthen the natural landscape of the Trans-Pecos region and to help its native species,” said Jeff Trandahl, executive director and CEO of NFWF. “In the past two years, new grantees and funding partners have expanded our reach, deepened our knowledge of the ecosystem and made possible landscape-scale projects that will enhance the streams, springs and grasslands of the Pecos River Watershed.” (U.S. Department of Agriculture, Public Domain)

WASHINGTON — The National Fish and Wildlife Foundation (NFWF) has announced $1.45 million in grants to help restore and sustain healthy rivers, streams and grassland systems that provide important wildlife habitat in the Pecos Watershed and adjacent areas of New Mexico and Texas.

(PWCI), established in 2017, is an innovative public-private partnership that leverages resources from corporate partners including Apache Corporation, Chevron, ConocoPhillips, Corteva Agriscience, Marathon Oil, Occidental, Shell Oil Company (Shell) and XTO Energy, as well as from federal agencies, including the U.S. Bureau of Land Management in New Mexico, the U.S. Fish and Wildlife Service and the U.S. Department of Agriculture’s Natural Resources Conservation Service (NRCS) in New Mexico and Texas.

ConocoPhillips, Corteva Agriscience and the U.S. Bureau of Land Management New Mexico state office are the PWCI’s newest funding partners, having joined the PWCI in the past year.

The seven grants announced today will be matched by $3 million from the organizations receiving funding for a total conservation impact of more than $4.4 million. These grants build on more than $1.8 million awarded through the program in March 2020 to eight projects that leveraged $3.7 million in match to create an on-the-ground impact of more than $5.5 million.

“Now in its fourth year of grant-making, the Pecos Watershed Conservation Initiative continues to strengthen the natural landscape of the Trans-Pecos region and to help its native species,” said Jeff Trandahl, executive director and CEO of NFWF. “In the past two years, new grantees and funding partners have expanded our reach, deepened our knowledge of the ecosystem and made possible landscape-scale projects that will enhance the streams, springs and grasslands of the Pecos River Watershed.”

The projects supported by the seven grants announced today will address key conservation opportunities, including grassland and riparian habitat restoration in the region that will directly benefit species of conservation concern. Projects that have a grassland focus seek to improve the quality and connectivity of native Chihuahuan Desert grasslands by improving habitat for pronghorn and migratory grassland bird species.

In a joint statement, the eight corporate members in the initiative said: “Our people are on the ground every day in the Pecos, living and working, so it is essential that the initiative’s investments provide real benefits to local communities, landscapes and wildlife. By strengthening the health of existing habitats along the Pecos River and its tributaries in eastern New Mexico and West Texas, by improving the management and function of native grasslands, and by protecting some of the last remaining populations of native fish and other aquatic species found only in the Chihuahuan Desert, we are achieving this goal.”

“Through the cooperation of our many partners, collaborative conservation and restoration will continue to occur across the diverse landscapes of the Pecos District, addressing both riparian corridors and upland habitats,” states BLM New Mexico Acting Associate State Director Melanie Barnes. “Controlling invasive species brings restored grasslands and improved water quality and availability and modifying restrictive fencing brings unobstructed movement across these landscapes for both large and small game animals.  Both of these efforts are management priorities for public lands.”

The 15 projects on the 2020 and 2021 award slates fund large-scale, cross-jurisdictional habitat restoration, expansion and improvement projects that will:

“Desert wetlands like the Phantom Spring Ciénega are diverse and complex ecosystems that support many unique species, including the federally endangered Pecos gambusia, Comanche Springs pupfish, and several aquatic invertebrates,” said Amy Lueders, the Service’s Southwest Regional Director. “Our project aims to restore this desert oasis for the continued survival of these imperiled species. This investment is a great example of how industry can work with the federal government and other partners to preserve natural resources for the wildlife and communities who depend on them.”

The initiative’s long-term goals include:

Since its inception in 2017, the initiative has invested a total of $6.5 million into 34 projects. Examples of projects funded in the past two years include:

Bird Conservancy of the Rockies will continue rigorous bird monitoring and install a new automated telemetry (Motus) site to further understand the non-breeding ecology of grassland birds in the Chihuahuan Desert. The project will track the movements of tagged grassland birds to estimate within-season movement and seasonal survival for these species and inform on-the-ground range management.

The Center of Excellence for Hazardous Materials Management (CEHMM) will provide instream flow for the Texas hornshell mussel in the Black and Delaware Rivers through short or long-term water transactions in times of low flow. The project will develop a framework for a long-term plan and budget to maintain instream flows.

The Parks and Wildlife Foundation of Texas will conduct herbicide application to restore at least 6,000 acres of brush-invaded dry mixed prairie in northern Hudspeth County, Texas. The project will strategically expand the existing grassland for the greatest net gain of contiguous, usable habitat for grassland obligate species like pronghorn.

Texas Water Trade will demonstrate the feasibility of restoring Comanche Springs through a groundwater leasing program. The project is evaluating the voluntary market transactions as a means of reducing pumping in the Edwards-Trinity aquifer to support the reintroduction of Comanche Springs pupfish and Pecos gambusia.

. More about the Pecos Watershed Conservation Initiative is available here

About the National Fish and Wildlife Foundation
Chartered by Congress in 1984, the National Fish and Wildlife Foundation (NFWF) protects and restores the nation’s fish, wildlife, plants and habitats. Working with federal, corporate and individual partners, NFWF has funded more than 5,000 organizations and generated a total conservation impact of $6.8 billion. Learn more at www.nfwf.org

About the Bureau of Land Management
The BLM manages approximately 245 million acres of public land located primarily in 12 Western states, including Alaska. The BLM also administers 700 million acres of sub-surface mineral estate throughout the nation. The agency’s mission is to sustain the health, diversity, and productivity of America’s public lands for the use and enjoyment of present and future generations.

About Chevron
Chevron and its legacy companies have been a fixture in the Permian Basin since the early 1920s. In 2011, Chevron produced its 5 billionth barrel from the Permian, and today we are among the largest producers of oil and natural gas in the basin. With approximately 2 million net acres of resources, Chevron is the Permian Basin’s largest net acreage holder. Chevron’s drilling program is expected to grow oil and natural gas production over the next several years as technology enables greater success in finding and developing energy. Chevron is committed to responsible practices that conserve fresh water and protect land, air and species unique to the Permian region. More information about Chevron’s practices can be found at https://www.chevron.com/projects/permian

About ConocoPhillips
Headquartered in Houston, Texas, ConocoPhillips had operations and activities in 15 countries, $63 billion of total assets, and approximately 9,700 employees at Dec. 31, 2020. Production excluding Libya averaged 1,118 MBOED for 2020, and proved reserves were 4.5 BBOE as of Dec. 31, 2020. For more information, go to www.conocophillips.com

About Corteva Agriscience
Corteva Agriscience is a publicly traded, global pure-play agriculture company that provides farmers around the world with the most complete portfolio in the industry – including a balanced and diverse mix of seed, crop protection and digital solutions focused on maximizing productivity to enhance yield and profitability. With some of the most recognized brands in agriculture and an industry-leading product and technology pipeline well positioned to drive growth, the company is committed to working with stakeholders throughout the food system as it fulfills its promise to enrich the lives of those who produce and those who consume, ensuring progress for generations to come. Corteva Agriscience became an independent public company on June 1, 2019 and was previously the Agriculture Division of DowDuPont. More information can be found at www.corteva.com

About Marathon Oil
Marathon Oil is an independent exploration and production company based in Houston focused on the most significant oil-rich U.S. unconventional resource plays. Marathon Oil’s multi-basin portfolio includes the Eagle Ford in Texas, Bakken in North Dakota, STACK and SCOOP in Oklahoma, and Permian in New Mexico and Texas. The company has a long-standing commitment to environmental stewardship and believes that protecting the environment is a direct and critical outcome of operational excellence. Its stock trades under the ticker symbol: MRO. For more information, please visit the company’s website at www.marathonoil.com

About the Natural Resources Conservation Service
The Natural Resources Conservation Service (NRCS), is an agency of the U.S. Department of Agriculture that provides one-on-one, personalized advice on the best solutions to meet the unique conservation and business goals of those who grow our nation’s food and fiber. NRCS helps landowners make investments in their operations and local communities to keep working lands working, boost rural economies, increase the competitiveness of American agriculture, and improve the health of our air, water, and soil. NRCS also generates, manages, and shares the data, research and standards that enable partners and policymakers to make decisions informed by objective, reliable science. In simpler terms, NRCS’s focus is “Helping People Help the Land.” For more information, visit www.nrcs.usda.gov.

About Occidental
Occidental is an international energy company with assets in the United States, Middle East, Africa and Latin America. We are one of the largest oil producers in the U.S., including a leading producer in the Permian and DJ basins, and offshore Gulf of Mexico. Our midstream and marketing segment provides flow assurance and maximizes the value of our oil and gas. Our chemical subsidiary OxyChem manufactures the building blocks for life-enhancing products. Our Oxy Low Carbon Ventures subsidiary is advancing leading-edge technologies and business solutions that economically grow our business while reducing emissions. We are committed to using our global leadership in carbon management to advance a lower-carbon world. Visit oxy.com for more information.

About Shell
Shell companies have operations in more than 70 countries and territories with businesses including oil and gas exploration and production; production and marketing of liquefied natural gas and gas to liquids; manufacturing, marketing and shipping of oil products and chemicals and renewable energy projects. Over the past 100 years, Shell has helped preserve and protect habitat and species through hundreds of conservation projects and initiatives. Collaborating with key organizations and environmental NGOs has enabled Shell to leverage its efforts to ensure the highest possible impact – including the protection of more than 13 million acres of wetlands.

About the U.S. Fish and Wildlife Service
The mission of the U.S. Fish and Wildlife Service is working with others to conserve, protect, and enhance fish, wildlife, plants, and their habitats for the continuing benefit of the American people. We are both a leader and trusted partner in fish and wildlife conservation, known for our scientific excellence, stewardship of lands and natural resources, dedicated professionals, and commitment to public service. For more information on our work and the people who make it happen, visit http://www.fws.gov/

About XTO Energy
A subsidiary of ExxonMobil, XTO is a leading oil and natural gas producer in North America with expertise in developing tight gas, shale gas, coal-bed methane and unconventional oil resources. XTO or its affiliates operate in all of the major U.S. unconventional producing regions and Western Canada. XTO also provides support and technical services to ExxonMobil’s operations in Argentina. The company manages 11 million acres with a total resource of about 139 trillion cubic feet equivalent.